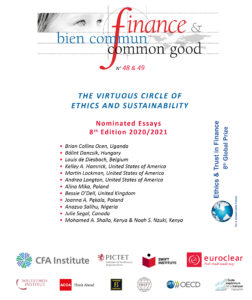 […] Regarding the long-term perspective, sustainability challenges many received financial activities which are – by nature – intertemporal. Indeed, one of the main jobs of finance consists of determining and pricing the value of time. Sustainability requires a change in weights – contradicting the well-established view – showing that neither discounting techniques nor discount rates are neutral. They all have an ethical dimension that needs to be debunked and properly understood. Some papers published here hint in this direction. We hope – in the next editions – to have more papers investigating from an ethical standpoint issues and problems where finance, accounting, insurance and actuary blend together sharing the same technical and conceptual tools.
The twelve papers published here – all nominated, i.e. discussed at the final Jury meeting – address three wide groups of ethics related issues.

[…] In this 7th edition three key subjects came up:
• The issue of the necessary but difficult dialogue and mutual understanding between, on one side, engineers – especially financial ones in charge of technical and digital developments or of new product design, and, on the other side, of financial operators concerned with the ethical dimension of their activity and with the consequences of this activity on society and the environment. Two essays stress the urgency to “get out of the silos”, or in some cases “help others get out of their silos” to discover and understand the concerns and doubts of the other stake holders. This can be achieved by designing ad hoc trainings and exposure tracks.
• At least three of the essays published underline the fact that ethical charters and codes are not sufficient. It is only by working together with the staff on the enhanced ethical quality of behaviour, on the sense of responsibility and on the capacity to spot ethical dilemmas when they arise, that financial activities will have contributed their share to make the world better. This is the only way to implement in practice the spirit of the letter of the rule. But alone this is not sufficient, and some of our authors, also propose to strengthen the regulatory framework.
• Some texts put forward proposals; some concern institutions, other regulations or new interesting services. Even if, in the last analysis, ethics relates to personal decisions and actions, structures either work as enablers of such behaviours or prevent them. For instance, one of the proposals developed in this book, suggests that the ethical quality of corporate culture should be taken into account be the regulator when deciding the level of capital requirements. This is a promising idea. […]

[…] In this 6th edition three different key subjects came up:
• Fintech and the different issues on how ethics applies to it; can technology substitute for some ethical concerns due to the automated factor? Or does fintech require additional ethical standards to control it.
• Trust declining as the increasing amount of client data allows financial groups to segment and ultimately discriminate against their customers. These new techniques need a new security system to prevent abuse.
• What initiatives should be continued and which should be abandoned. In this context, a renewed look at the traditionally paternalist role of financial institutions. The appropriateness of ‘nudging’ and how far it is possible to go in pushing products considered right for the investor profile. Should the financial system be regulated as a common good? Finally, as a concrete measure one of the essays looks at using a MOOC which could treat ethics on a global scale. […]